At the end of 2014 it was obvious that we needed to upgrade our existing edit suits. Our previous kit had come to the end of of it’s life and we wanted to start from scratch on building a new one.

I came across an article referring to Softron MovieRecorder being used for ingest on the ITV Tour De France Highlights program and spoke to yourself and Alex Snelling at BES 2015 about it’s potential. The workflow for that show was similar to ours. As it was still up in the air as to which NLE we were going to use we needed something that would work with both Premier and FCPX. These shows have to have a highlight program ready to go to air an hour or so after end of live program. A couple of legendary editors & Softron MovieRecorder enables this to happen it is now used as the master ingest station for the Blancpain Endurance Series - Blancpain Sprint Series - Total 24hrs of Spa - Sepang 12 hours GT Event. https://youtu.be/-S4CXjxlX6c

The workflow of all of these live event programs has been radically improved by using MovieRecorder. As well as edit while ingesting and the segmented recording features the ability to capture the same timecode locked footage to several places at once has been invaluable

Not only that but the support we received from the get go has been outstanding with early morning support calls from half way round the world to super fast authorisation at critical moments. Their team has left us feeling pretty special.
It’s great to see frequent updates and features being added to the software too as it shows a commitment to the platform.

We are currently using 2 systems to segment capture the TX on both clean and Dirty feeds. 2 Mac Mini’s ingest to a NAS giving the 3 edit stations access to the media at any time. We have two primary edit stations based around 2 MacPro (Dusty Bins) running Adobe creative suite. and a couple of access points for Macbook Pros for online material. A second set of 'walk away' backups is done via a mirrored raid.

When you’re putting together kit for a live production environment, where you absolutely have to deliver, the support you get is crucial. I have to say that we’ve never had any tech issues with Movierecorder, touch wood, but we’ve had great contact right from the beginning. Even to the point where we were about to go live on an event and a new copy of Movierecorder was needed to solve a problem. We contacted Softron via the support page and got a call back within 15 minutes. Ok so thats fast ,but then it turns out that the support team were in Vegas at a trade show and it was 05:30 in the morning. They called us directly to make sure we had authorisation and support from the other side of the world. That sort of thing lets you know you are dealing with a company that cares about it’s customers.

Moving into our 3nd year with the system we now have a really streamline workflow that gives us great flexibility and potential for growth. Ingest has now become such an important part of our process with teams and 3rd party broadcasters requiring copies to make their own highlight reels. It’s going to be an exciting year ahead for the championship so people can find out all about it here: http://www.blancpain-gt-series.com 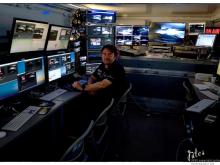